Read this at WHOI.

It was a typical day in paradise. Not even a hint of breeze disturbed the glistening waters of Almirante Bay, a wide, sheltered cove on Panama’s Caribbean coast. Before heading out for a day of routine monitoring, ecologist Maggie Johnson and her intern, Lucia Rodriguez, took a moment on the boat to marvel at the reef’s beauty—and how awesome their jobs were.

Then they dove in.

“It was shocking and heartbreaking,” recalls Johnson, a former WHOI post-doctoral scholar who was working with the Smithsonian’s Marine Global Earth Observatory (MarineGEO) at the time. “We noticed murky water starting at a depth of 9 feet (roughly 3 meters) and fish swimming in groups just above that layer. When we snorkeled down to see what was going on, we saw brittle stars, urchins and snails had climbed to the tops of mounding corals in an attempt to escape. After we came back up to the surface, there was a rotten egg smell on our skin.”

These brittle stars climbed onto coral in an attempt to reach oxygen during a hypoxia event off the coast of Panama in 2017. Normally they would be hiding during the day. (Photo courtesy of Maggie Johnson) 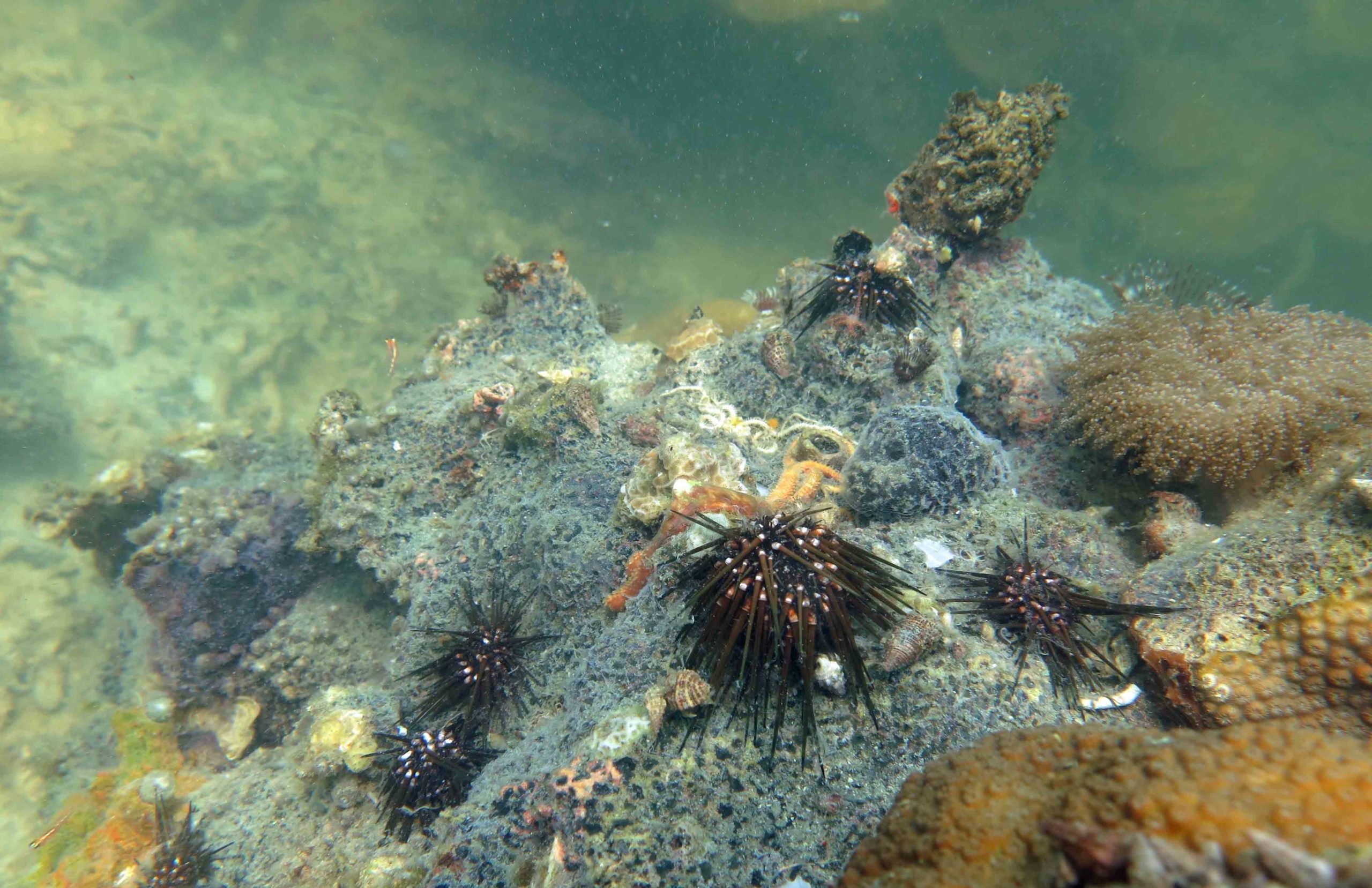 These urchins climbed onto coral in an attempt to reach oxygen. Slow-moving or immobile creatures did not survive the 2017 mass mortality event. (Photo courtesy of Maggie Johnson) 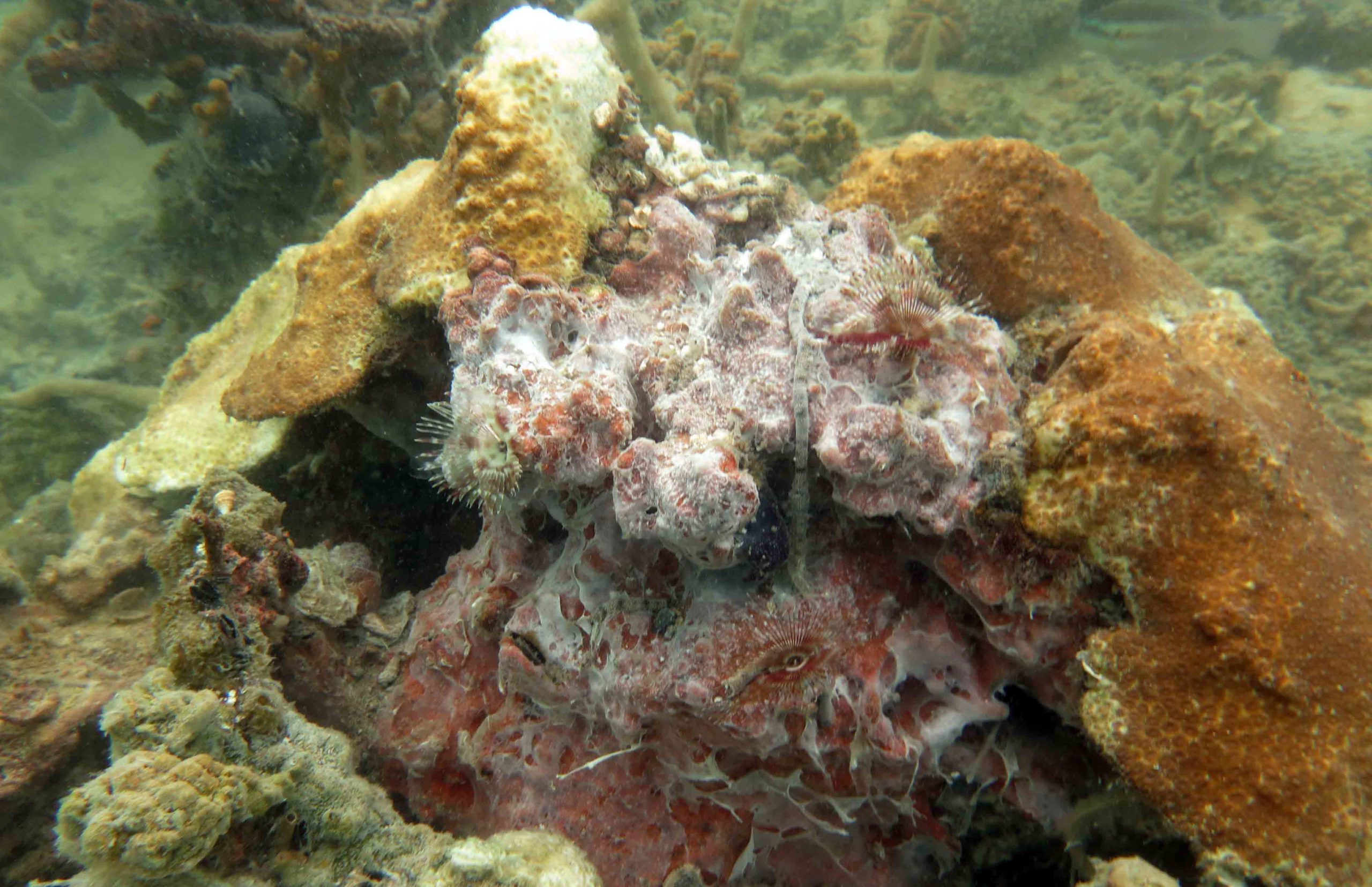 Johnson knew the culprit: a deep pool of hypoxic water, containing little or no oxygen, had shoaled on the reef. Marine organisms had been forced to metabolize with sulfur instead of oxygen, producing hydrogen sulfide, which smells like rotten eggs. Anything that could flee, like fish, got away. But for slow-moving invertebrates and corals, there’s no escape route. They were all decimated.

The “death spiral” continued for several days in September 2017, Johnson recalls, until the wind or currents delivered fresh, oxygen-rich water into the bay. With the right equipment and a team of divers to sample and survey, Johnson and her colleagues found that about half the corals in the area had died. Now, nearly 5 years later, most of the coral has yet to return.

As disturbing as this event was to witness, it caused Johnson to expand her research focus from ocean temperature and acidification to include the impacts of hypoxia on tropical reef systems.

With Co-PIs Andrew Altieri (University of Florida) and Valerie Paul (Smithsonian Institution), she embarked on the first systematic assessment of the response of corals to hypoxic stress, as part of a project funded by the National Centers for Coastal Ocean Science Coastal Hypoxia Research Program. This research is part of a growing movement among marine biologists to identify the sources and impacts of low-oxygen events, which threaten everything from shallow coral reefs to lobster, crab, and shellfish habitat in coastal regions.

“As ocean waters warm, they hold less oxygen. Some places, particularly if they have poor wastewater treatment and lots of development, are more susceptible,” says Johnson. “When you combine pollution with warming, you really get the perfect storm of events that can lead to acute deoxygenation.” 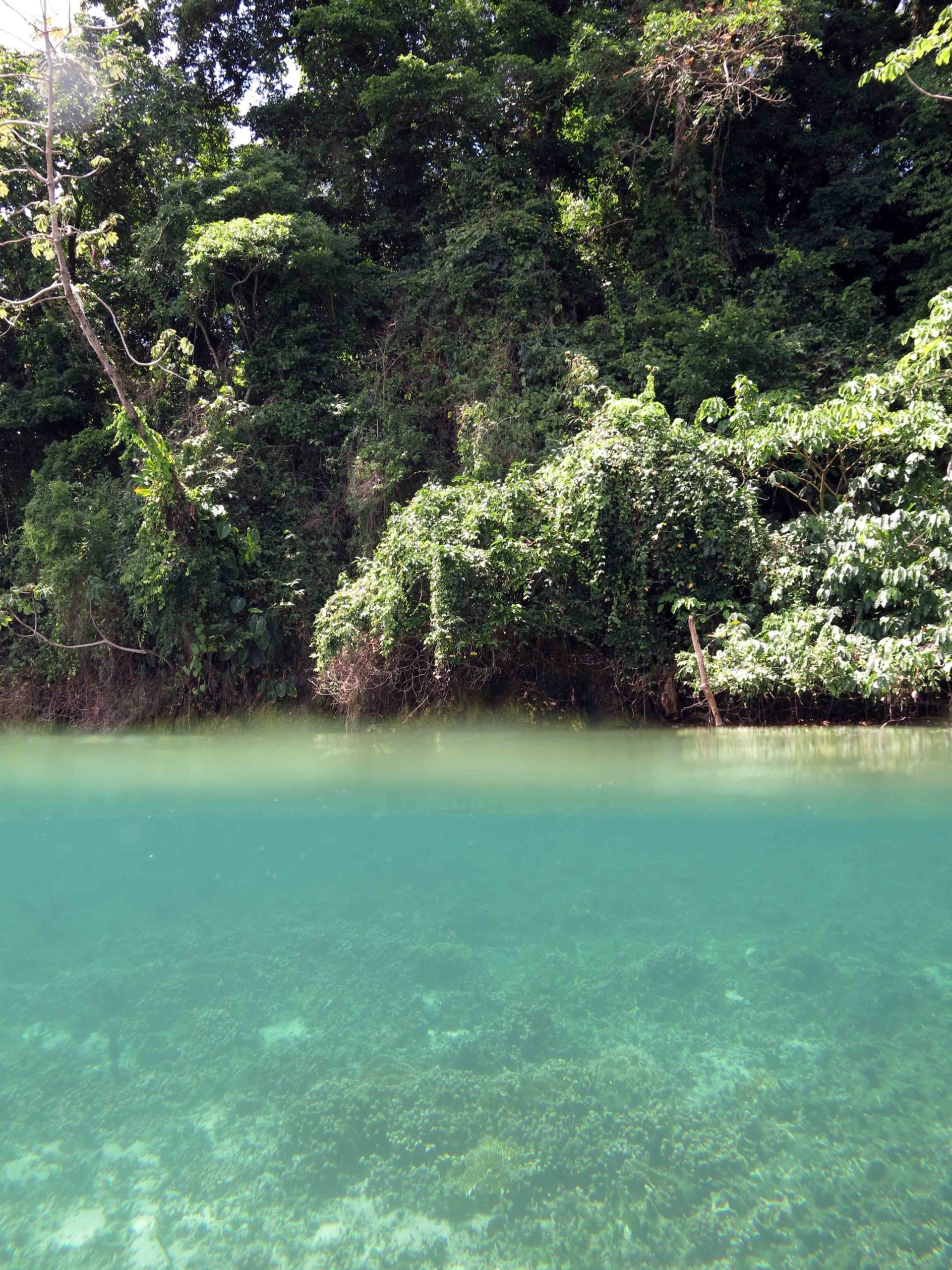 A murky stream of hypoxic water is visible just below the surface at Cayo Roldan, a shallow-water reef in Almirante Bay, Panama, in 2017. (Photo courtesy of Maggie Johnson)

While there are some natural “oxygen-minimum zones” of the ocean, deoxygenation is caused primarily by man-made pollution. When nutrients from fertilizer, wastewater, or fossil fuel emissions enter areas of the ocean that aren’t well-mixed, it’s a recipe for an algal bloom—sometimes a harmful one. As the bloom dies off, it consumes the available oxygen in the water, a process known as eutrophication. On a large enough scale, these die-offs can create “dead zones” of deoxygenated water, with serious downstream consequences for marine life, the nutrient cycle, and climate regulation.

According to the UNESCO-affiliated Global Ocean Oxygen Network (GO2NE) and the Intergovernmental Oceanographic Commission, the volume of anoxic ocean water has quadrupled, since 1960, to an area the size of the European Union. A 2018 review in Science listed over 500 coastal sites around the world affected by low oxygen conditions, and states that 13% of coral ecosystems are at elevated risk due to low oxygen levels. Johnson says that number could be much higher in tropical zones. Due to a lack of resources in many tropical countries, and because low-oxygen events typically only last a few days, it’s hard to catch them in action. 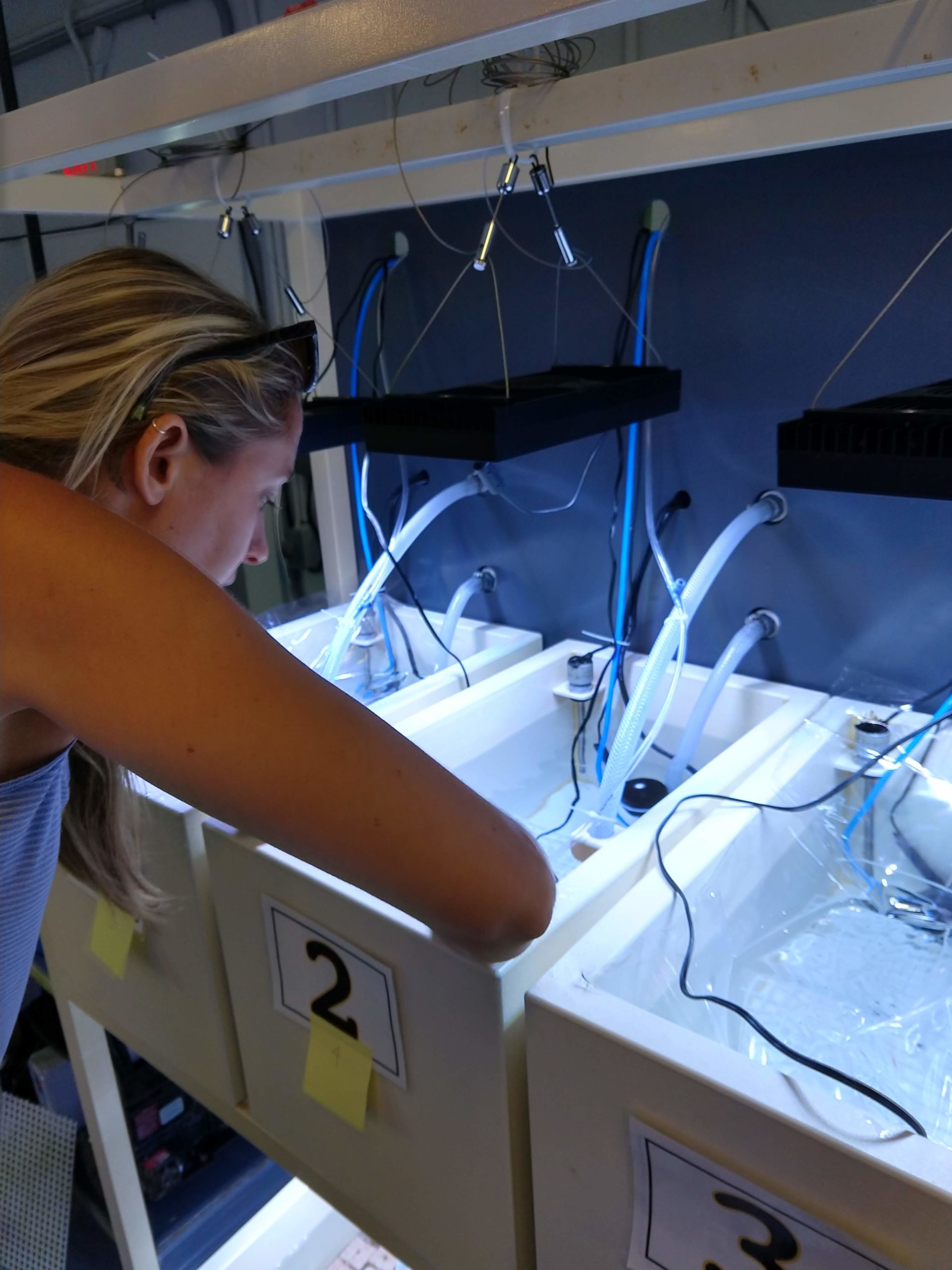 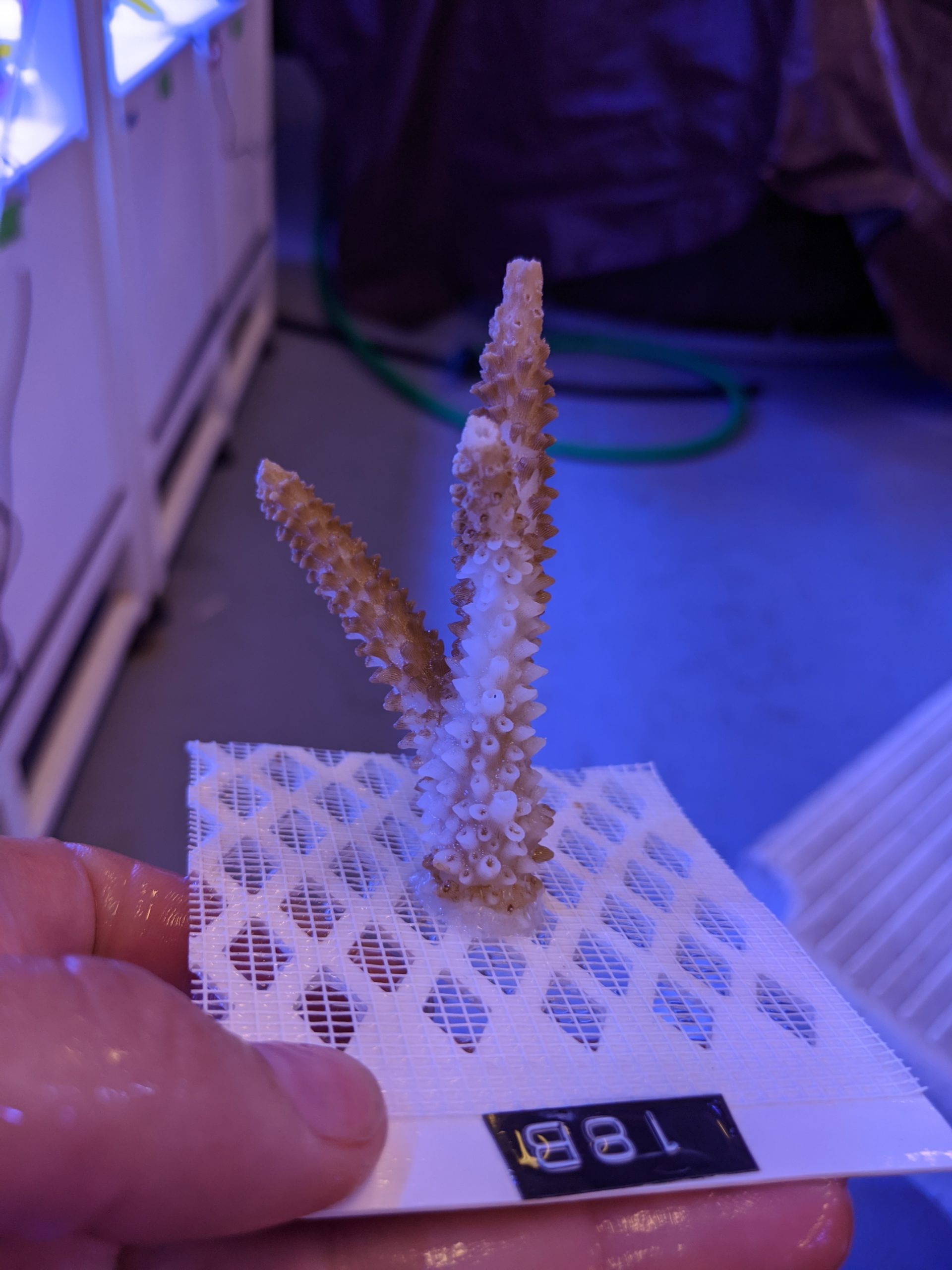 To disentangle the impacts of low oxygen from warming and acidification in nature, Johnson and her colleague Sara Swaminathan turned to the lab. Using coral fragments from a Florida nursery, they exposed the samples to various oxygen levels over a period of days. Their findings, published in the January 2021 issue of Scientific Reports, showed that staghorn coral experienced significant tissue loss within two days, whereas the mountainous star coral showed little change, even after eleven days of severely low oxygen exposure.

According to Johnson, understanding the impacts of low oxygen levels on specific species could help scientists figure out ways to protect them. “Noticing the corals that survived the event [in Panama] really kicked off my work, looking at differential tolerances to hypoxia,” she says. “Knowing which super-star corals can survive such low-oxygen conditions could be really important for conservation and restoration efforts.”

Johnson has since joined the research staff at the King Abdullah University of Science and Technology (KAUST) in Saudi Arabia, but continues to collaborate with WHOI biologist Ann Tarrant and post-doctoral scholar Yaamini Venkataraman on coral research. The trio are investigating what happens on the molecular level when corals experience hypoxia in the hopes of identifying low-oxygen thresholds for different species. 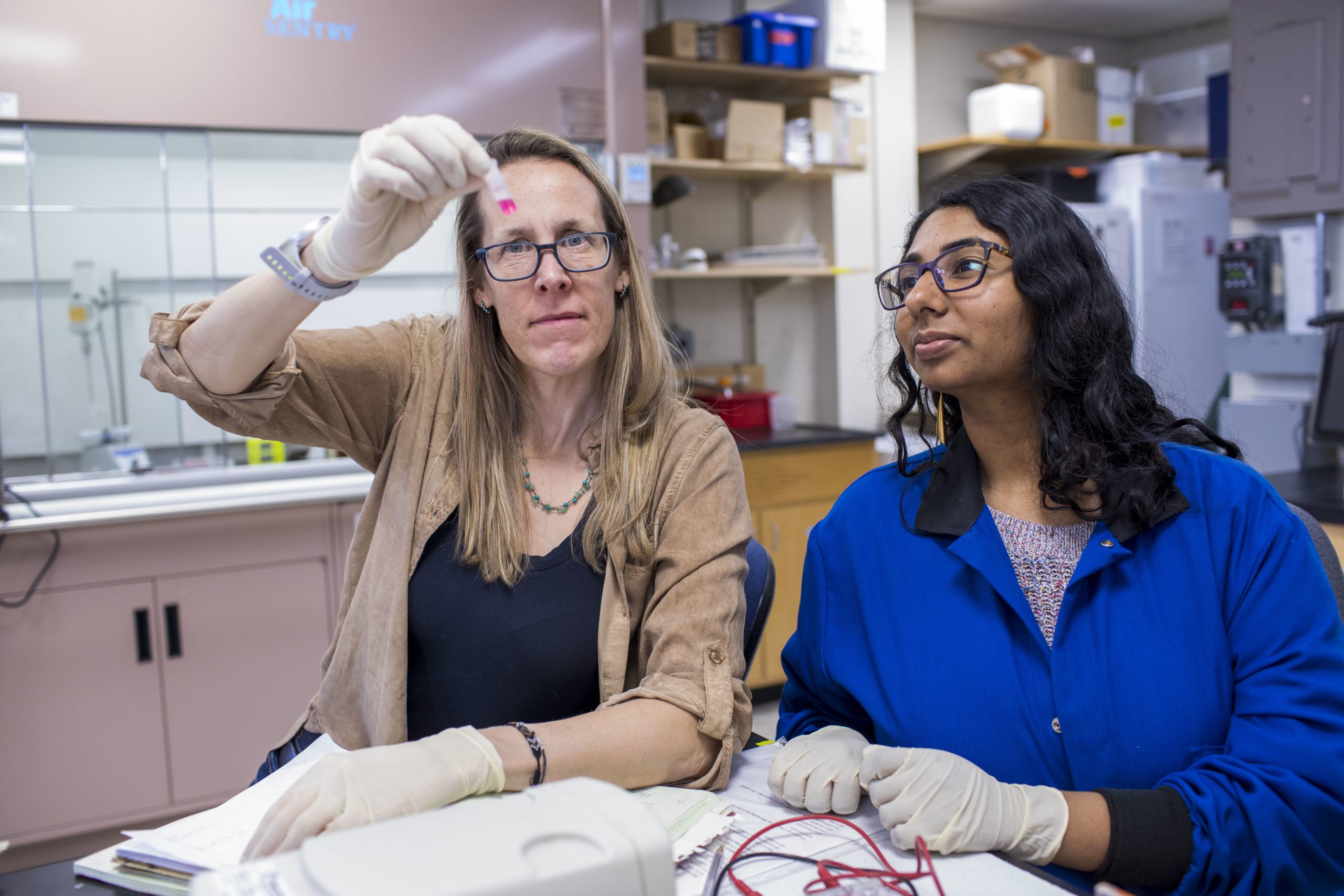 “I think of it like looking under the hood of your car to find out why it’s not working,” says Venkataraman. “We know some corals are more affected than others, and different conditions affect them more than others, so we need to look under the hood to see how all the different little parts of molecular machinery work together. Similar methods can be used to answer bigger questions, like how long a hypoxic event impacts corals, and at what point in the coral lifecycle is that impact most pronounced.”

To answer these questions, Tarrant says, researchers will have to do more than pop the hood. Widespread monitoring of oxygen levels and hypoxia-tolerant microbes on coral reefs, combined with genetic testing, will allow them to identify areas—and species—at risk of a low-oxygen event.

That means doing a full system checkup on coral genes to find out how they regulate their metabolism, energy storage, and reproduction—and how these processes change under stress.

“These lab experiments give us a library of responses that could help us develop new diagnostic tools for reefs,” Tarrant says. “What are the consequences of environmental stresses, and how do corals come out of it? What can we do to stimulate growth and wellness? Molecular physiology helps us understand that.”